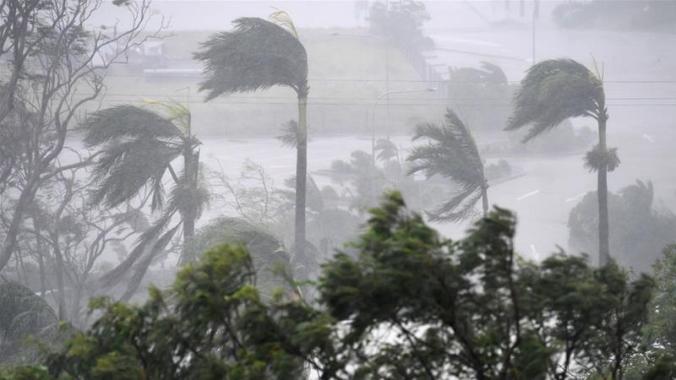 After the storm the whitened limbs

of the sea-sucked trees stuck in the reef

catch your eyes more than

the thousands of others strewn on land

after that day and night of the sky

as a limb of the murderous sea

pawing over us, its hind legs

raking the beach, the screaming.

An open ocean storm upset with

the prospect of shores

and land its meat. And trees.

The laundromat in Malaeimi left its

washers sitting on a concrete slab

for an answer.  Why is it everything

looks burned by her breath?

come to deliver the yachties from

the cliché of their reality, a fragrant

a soft green rain on the harbor

while roof irons sliced through the

other, upper air—an argument that

wasn’t theirs, a domestic tiff

between the natives’ deities.

We stayed up all night and listened

the chorus running its fingernails down

the blackboard of night.  We got stony

still and ever so insignificant,

the children never out of our reach.

Any end should come in such a roar,

something twin beyond description,

a possession by 50-foot seas,

another tree downed in the bush

and swept by common magic

back to mama ocean.

Strike the stone the phone rings

around towards the back where

the houses are all blown down and

strike a match in the night

there’s nothing there but concrete

beneath your feet a few inches

off the ground and weeds all around.

when you piss on the weeds

you can suddenly smell them in

the dry wind with all the palms

snapped near the top you can

see the ocean from just about

anywhere and the women are still the same. 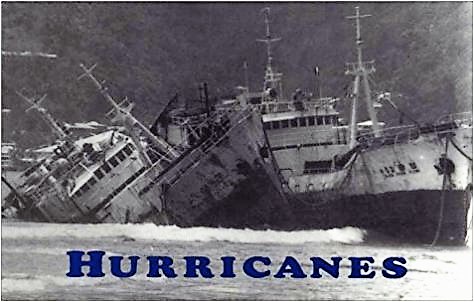 What do you know? The power is back on. It was off when I got home at dusk and I got all my hurricane and Coleman lanterns fired up. There’s a hurricane warning for tonight, and I really didn’t figure that (the power just went off again) the power would come back on. Well, I was partly right, temporarily wrong. Back to writing by hurricane lantern (that long shadow the pen makes across the page). The computer is unplugged.

Hurricane Val. Val? Sounds more like someone who wants to put ground pepper on your salad than a storm that’s going to toss your coconuts.

I have been suffering from a somewhat severe depression. The place is so trashed. Everything seems pointless. But the house slowly takes on a rather bedraggled normalcy. Still no power or phone, and it will be a while longer before the repair crews get this far out.

Part of your check went for a little fake Christmas tree for Liam. Thank you. That other storm I mentioned slipped east of us and headed for the Cook Islands. I still have no doors or windows on my ocean-side verandas, and no structural repairs have been made save what limited stuff I could accomplish to make the place minimally safe and livable. Another storm really could wipe the place.

Those are the opening and closing paragraphs of my contribution to a book called Hurricanes about living with Hurricane Val in Samoa at the end of 1991. The images of what is happening in the South this season brought back those memories. I hope my posting this will not be taken as a case of catastrophic appropriation.