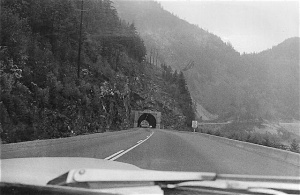 It was a month after the killings at Kent State, June 1970. Linda and I chose to drive across Canada rather than the dangerous States from Berkeley to New Jersey to spend the summer with her family at the shore. It meant an extra thousand miles or so in our ten-year old MGA, but it was also new country for us—Oregon, Washington, Vancouver, British Columbia, Alberta, Saskatchewan, Manitoba. It went smoothly enough. We blew a grease seal on the left rear wheel in Moose Jaw, but I found a mechanic to replace it. I’d had a luggage rack attached to the rear trunk lid. Most of our luggage was strapped on there beneath a tarp. Linda wore a Mexican serape.

For most of the 1400 miles across the Canadian high plains we had the two-lane blacktop of the Trans-Canadian Highway pretty much to ourselves. Empty, empty country. Cool sunny days. We drove with the top down. We spent the nights at cheap motels. Near Winnipeg we heard that the road farther east to Thunder Bay and Sault Ste. Marie was much too rough for our little sports car. We were advised to head south from there, to North Dakota. We reluctantly followed the advice.

It was strange to feel trepidations about returning to your own country. In the weeks before we left Berkeley, I had been involved in the campus-wide protest and strike against the war in Vietnam. I was in grad school at Cal, in the Anthro Department. I was spokesman for our program’s group. I had been tear-gassed and chased, attacked and retreated, been at every demonstration and confrontation. Governor Reagan made sure that there were as many troops as students on the campus. After a while, it was more than just a protest against the war; it was a fault line splitting society. And the other side had both the weapons and the dispensation to do as they pleased. The semester ended in hiatus. Incompletes all around. Linda was tired of it. She missed her family and her home away from such confusion. We packed and headed north.

Picture: a small, pale blue, foreign sports car with California plates, its back piled with luggage beneath a dark blue tarp. Up front, a hippie couple—he bearded, his long hair flying behind him in the top-down breeze; she, a small dark beauty in a Mexican serape. Our arrival at the lonely U.S. border crossing station was probably the event of the day, if not the week. A squad of brown-uniformed officers surrounded our car—amused happy faces. One officer, laughing, motioned for me to drive forward and pull off into a parking lot. Linda grabbed my arm. “Whatever you do, don’t let them take me away. I must stay with you. Don’t do anything stupid.”

It took more than an hour, but they did not try to take either of us away. One officer checked all our papers, while another proceeded to unpack the car. Everything came off of and out of my carefully packed little blue chariot. Every piece of luggage was unpacked, its contents spread across the macadam. My tennis balls were bounced. Linda’s perfumes were all sniffed. Nothing was left unfondled. As he went about his deconstruction, the officer made verbally clear how much he despised us and what we stood for. He had a son who was a pilot in Nam, and as far as he could tell we were his son’s enemy. Etc. He had a point, and he kept repeating it. Linda held onto my arm, but I wasn’t going to say anything. Finding nothing, he finally left. It took us more than an hour to repack. All of this inside a cloud of mosquitoes, the big ones.

But our real welcome back to America did not happen until later that day, around dusk, as we pulled into Fargo. We had not eaten since breakfast, and there up ahead were the golden arches of a McDonald’s. We laughed. Why not? A classic American meal to welcome our stomachs back to their homeland. No drive-through for this occasion. We parked and went in. There were no other customers. We stood there, looking up at the menu above the counter, trying to decide what to order.

“No, no, man. It’s the real fucking thing,” someone said. I looked down, and the two counter boys in their matching uniforms were gawking at us. “Hey, hey! Come here! Look!” Within a minute, the entire staff of the place was standing behind the counter, staring and laughing. The girls were pointing at Linda. “Hippies,” someone said. “Well, I’ll be.”

We left without ordering. I don’t remember where we ate that night, but I will always remember Fargo.