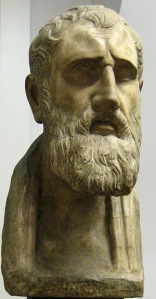 It is popular and easy to pick on the American male psyche, its blind spots and delusions (e.g., TV ads). We all know who we are and to what extent we replicate the typification. (Robin Williams to Nathan Lane: “I didn’t know John Wayne walked that way.”) It’s a camouflage we all learn young, and some of it grafts into personal armor. Fate knows that we have all escaped bad situations by pretending to be brave and have acted the total dolt in matters hormonal. But tonight I would like to signal out one trait of that cowboy outfit for acknowledgement–Stoicism, no matter how tepidly preserved.
Ranger Zeno of Citium, please step forward; yes, you there, the one not paying attention.

Veterans won’t talk about their wounds. Baseball players cannot rub the spot where it got ’em. Hockey players aren’t allowed to cry. I can get by with, I got out of the hospital Friday. We’ll see what the bill will be. Gotta love it. Home, convalescing, a basketfull of pills to take. No big deal. At the end of how many half-hour shows was Hopalong “just winged,” with his arm in a casual sling as he rode away into the credits? A couple of slugs of saloon rotgut were all the Duke needed before going under the dirty doctor’s knife. “No pain, no gain” bullshit.

I have been in pain as long as I can remember. Pain has been a constant companion, and mostly a secret stalker. It was just another thing to hide. I don’t want to go there tonight, to examining life as a list of what I’ve had to hide. (Although, that is an interesting idea.) I’m just glad I don’t have to talk about it. Besides, I’d misspell a bunch of the med terms and drug names, and, really, who cares? It’s no autopsy.

Of course, a true stoic would also be given to showing no interest in joy as well as in pain. Did they see the difference and manage to treat them the same? Or was it just an emotive control thing? They were all Mediterraneans, after all.  It was no joke in my Irish family that emotions were things that other people had, like Italians. (So I married one.)  But I like our customized American version of masculine stoic, where good shit can be acknowledged but not featured. Pass out the cigars; no need for the obstetric details.

I have again escaped the tubes and needles, and it is Act One of Another Spring. We’ve rehearsed this ten thousand forests before–the dead gray dirt rises up and covers itself then everything else in a verdant blanket of dense, frantic reproduction. Mind-boggling every time.

The stoic accepts what is. The sage is the one with the fewest illusions. I am dying. But I am going to take my fucking time about it. So may we all.

One thought on “Zeno of Citium”