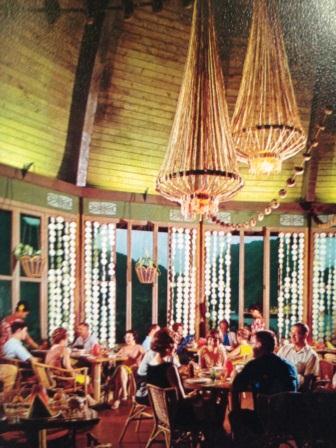 It was a beautiful room—tall windows on three sides with a panoramic view of Pago Pago Bay and its lush encompassing collapsed caldera, a high-domed Samoan ceiling from which hung imposing chandeliers of strung seashells. True, if you looked more closely, there were vertical cracks in the arched concrete columns and some of the windows could no longer be opened and others no longer closed. The carpet was best ignored. Who knew the last time the chandeliers had been lowered and cleaned? The main dining room at the government-run, once luxurious Rainmaker Hotel was slipping into its final days, but it was still a place where, out of habit, businessmen took politicians for lunch, the late ‘80s. Every Friday, John and Colin and I would meet there for lunch, and sometimes the entire afternoon.

John was John Kneubuhl, the afakasi Samoan playwright and retired, highly successful Hollywood writer. Uncle John, as we all knew him, was my island mentor, who had taken me into his family. At the time, he was writing his final great trilogy of plays collected in Think of a Garden. Colin was the British anthropologist and ethnomusicologist Colin Turnbull, author of The Forest People and The Mountain People. Colin and I had become close through letters before he retired to my village out on the western end of the island. Colin would pick up Uncle John then swing by the museum where I was working at the time running a folk arts program. We always ate at the Rainmaker, at the table closest to the view, our backs to the room.

What I remember best is the conversation. That is what I meant to write about, the sensation of those free-floating hours of talk. After thirty years, I can be excused for not recalling the topics of our conversation. Much of the time I just listened. I was junior to both of them by twenty-plus years, and I very much felt that. I can tell you what we did not talk about—politics, sports, current events, religion, ourselves. Both John and Colin had been trained as classical pianists, and sometimes they would disappear into discussions about Shubert or someone and I was wholly excluded. There were never any arguments. Voices were never raised, except in laughter or to get the waiter’s attention for another round of drinks. Usually, we three were the last luncheon patrons remaining.

Both John and Colin have been dead a quarter of a century now and the Rainmaker removed as rubble. Nostalgia serves no one, but I wonder where that world of conversation has gone, that camaraderie of minds dueling with reality? Not a Tweet nor text nor voice mail, but that open-ended art of personal discourse that engages all the senses with the intellect, the leisure of it all. We three amigos leaving the Rainmaker on a late, hot Friday afternoon, already looking forward to our next raconteur rendezvous a short week hence.

2 thoughts on “Fridays at the Rainmaker”