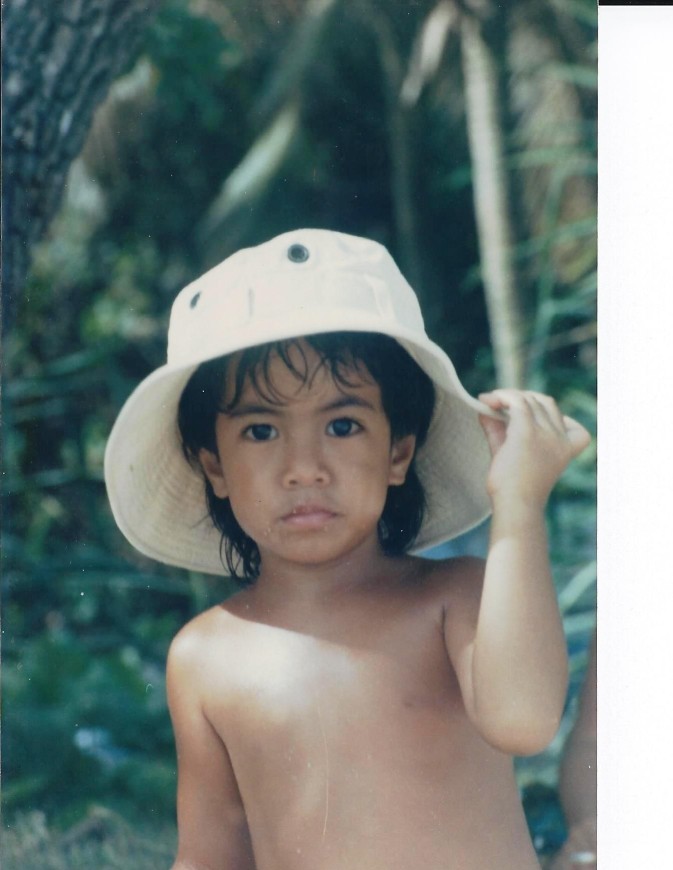 The photo is of my son Liam, on a beach in Tutuila, American Samoa, getting on a quarter of a century ago now. He had appropriated my hat. It is not a Samoan hat, though he is a hundred-percent Samoan. It is a palagi hat. Palagi, properly papalagi, sky breaker, is the Samoan term for Caucasians. I’m a hundred percent palagi. I adopted Liam, in Samoa, when he was one-month old. We spent the next eighteen years together there. He was an exceptionally brave child. You can see it in his face. He was fearless when it came to doing what he thought should be done.

Fourteen years ago, while still living in Samoa, I started writing a series of police procedural novels set in Samoa. I had lived and worked there for more than twenty years. I wanted to share what I had learned about this richly different place. I invented a Samoan detective, Sgt. Apelu Soifua, and through four books dwelled in his bicultural conundrum of an American-trained cop in a Samoan world. For years I had demurred, even though my island mentor, the Samoan playwright John Kneubuhl, had told me to just fucking do it. After Uncle John died, I took his advice. I had no idea at the time that I was committing a literary crime.

How dare I, a palagi, assume to write about the experiences and thoughts of a man from another—indeed a colonialized—culture? What presumption! Larceny!

I wish Uncle John was still around so we could mull this over. John was afakasi, half Samoan, half palagi. Born in Samoa, he had learned his trade under Thornton Wilder at Yale. He had spent decades in Hollywood as a very successful TV/screen writer, churning out scripts for such shows as Star Trek, The Fugitive, Gunsmoke, The Wild Wild West, and Hawaii Five-O, among many others. He was a master at cultural appropriation. In the end, he returned to his island home and roots in the masterful trilogy of plays in Think of a Garden.

Uncle John would have warmed to this debate. I know he would have railed against any ideology placing borders on an artist’s creativity. “How dare Shakespeare write about Danes or Italians?” “White-out Twain’s Nigger Jim!” A fifth of Scotch and a lot of laughs. Then we would have moved on to some more serious topic.

Is exclusivity essential to diversity? Is there any need in art for political police? And who are these people? Don’t they have anything constructive to do? How about trying on someone else’s hat?

One thought on “Cultural Appropriation”