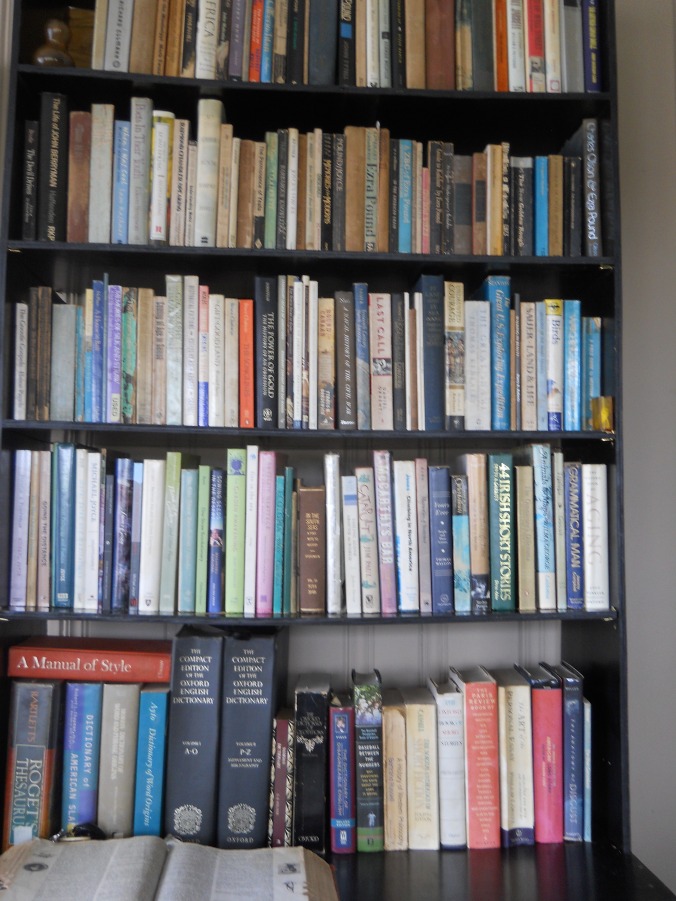 I just moved, again, probably for the final time—I can’t imagine repeating it—to an oxbow bend on the Ohio once called Yellow Banks. The other day someone asked me if I missed Rhode Island, and I said, sure, just like I miss Manhattan and San Francisco and Hong Kong and Pago Pago and some of the other places I’ve lived in between. Life is finding things that you will miss. Never been an owner; always had to move.

Among the possessions moved were twenty-some boxes—half a ton—of books, which now occupy 50 feet of bookshelves in my new study. Many of those books have followed me over 20,000 miles of relocations in the past half century. Along the way, at least that many again have been jettisoned. When I finally got them sorted and shelved, my Kentucky daughter-in-law declared my library quaint. She consults her smart phone for all the info she needs. Books put her to sleep.

What is the purpose of this burden of books? The vast majority of these volumes I will never open again. Why do I still have them, move them, value them? They are not an investment. They were not collected to be resold. If anything, they will be a pain in the ass for my survivors. Most of them are not new, many were bought used. They all are worse for wear and a quarter-century living in the tropics.

Hauteur? Whom do I wish to impress? I remember the pride of my last-mid-century peers in their extensive collections of LP vinyl record albums. It was an outward sign of some sort of class. (Now, it’s all available streaming from the cloud.) Personal libraries were once like that. In Samoa—before the Internet and Google et al—I hoarded reference works. Accumulation with a purpose. (My 50-year-old American Heritage Dictionary defines accumulator as an apparatus for storing energy or power.) I suppose the contents of a personal library may afford a public self-definition of sorts, at least about areas of interest and arenas of ignorance. But who cares?

Books are my only real possession. As I unboxed them this last time, it was a bit like meeting old friends. Aging is a cancer on memory. Certain recollections blossom into iridescent tumors while others atrophy and vanish. Each book was an evocation—a place, a time, a passion. Together, they mosaiced a fragmented history of me. Books as mementos. Lorca, Poeta en Nueva York—my undergrad years, Spanish Harlem. Sauer, Land & Life—Berkeley, the outer world. Olson, The Maximus Poems—the mind as a map. Stevenson, In the South Seas—the Pacific, Samoa, the peace of islands. There were books by old friends, many now dead; books I had edited; books I never finished but had meant to get back to; books I had taught; my worn and taped-together but still vital Peterson’s A Field Guide to Western Birds.

I explained to my daughter-in-law that this was my man cave and that these books were my tools, my memory tools of the past. Not just my past, but of everything I knew of the past, now that the past was all that was left.