St. Augustine, Florida. Less rush than ever now. We’ve escaped the cold. In Savannah I switched to flip flops. A beach-front hotel room with a balcony looking out over sand dunes to the sea, a full moon rising like a whole note up a scale of clouds. The wind in coconut palms makes a sound it doesn’t make in any other trees—the sound of so many years. I’d almost forgotten. The way the jungle used to breathe at Atauloma.

This was a purposeful stop. I’d never been before. How had I missed this place of so many firsts? Oldest permanent European settlement in the future colonies (1565); first Caucasian birth (1566); first African birth (1606); oldest surviving fort, Castillo de San Marcos (1673); first capital of Florida. San Augustin was also the earliest site of contention for control of the continent that lurked behind it. Spanish, French, British, and the indigenous people would fight for centuries for control. It even figured in the War of Jenkin’s Ear (1739-42). I had never heard of that war either. I’ll leave it to you to look it up. For all its historic firsts, St. Augustine is a humble place today, with fewer than 17,000 residents. The state that has spawned from its seed to the west and south would seem satanic to Ponce de Leone. 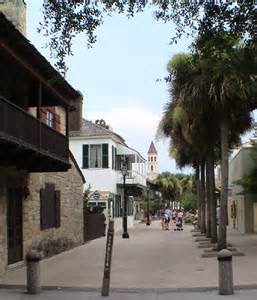 Recent additions to the landscape of the states are the cell-phone towers. The tall, slender, tapering fingers of latticed steel festooned with gizmos are never far from sight. Babel towers. How did the nation ever get by without them? The air that surrounds us is the ether the ancients proposed that carries our messages, which saturate us in something called wavelengths. There is no escaping the wavelengths. We pass a tower disguised as a lodge pole pine, only it wasn’t. It was a cartoon tree—fooling no one—of identical fake limbs interspersed with the gray shapes of receivers and transmitters. It was like a joke about itself. Somewhere past Daytona Beach the temperature creeps past seventy.