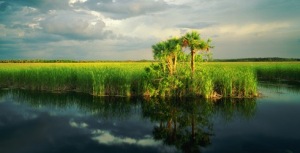 I have never liked South Florida. There is a sameness I find maddening, an Elmore Leonard crime scene encased in traffic, too bright by half. But I did not come here to complain or to draw comparisons. I came here to sit in the sun by my sister-in-law’s pool. The traffic is hard to ignore, though. I doubt there is a place on earth—not even So Cal—where the ubiquity and centrality of the automobile is more pronounced. Nothing is done without the car. People are the creatures that cars contain. Pedestrians are an endangered species. It’s getting on two million people here, but there are many more vehicles. The sound of traffic never subsides. Sirens seem to travel in packs. And there is a franticness about it all, as if everyone is on an essential mission or terminal errand.

More than half of Broward County is part of an uninhabited swamp called the Everglades. Clever name that for a vast wetlands, better than Neverdry. In fact, the county was supposed to be called Everglades County, but a last-minute political switch named it instead after a former governor, Napoleon Bonaparte Broward. 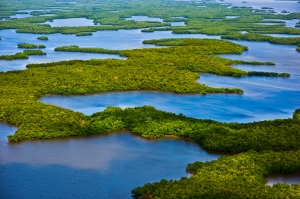 This municipality, Pembroke Pines, ends at the edge of the Everglades. It was carved out of the Everglades. First came canals to drain the swamp. Then large ponds—called lakes—were scooped out of the mud and limestone, their excreta used to mold high ground for streets and houses and strip malls. Gators and panthers and pythons were told to stay west of US 27. This is people country now. Well, car and people country.

Most houses here have one of these unnamed “lakes” beyond their backyards. With the waterways come waterfowl—herons, egrets, ducks, coots, kingfishers—and the waterways become flyways. It’s hard to set up borders against birds. These placid channels are their meandering boulevards to and from the open ‘Glades. I watch twin white egrets flash by just above the water, to the sound of a Kawasaki screaming through its gears over on the avenue.

It snowed softly all day today back home. The woods would have been especially hushed, only crows about.