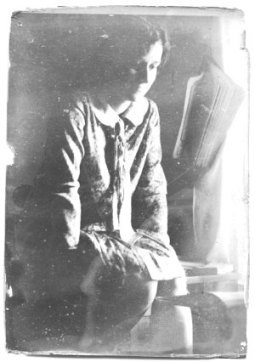 My mother, Winifred Culliton Enright, was a painter. Her paintings hang on my walls. They have gone everywhere with me, to the South Seas and back. They have survived all the tropical cyclones I have. They are as part of my life as this tattoo, and like a tattoo I hardly see them anymore. They are her surrounding metaphor, she who is always with me but rarely in my thoughts.

Having an artist, an art teacher, for a mother took some of the mystery out of the profession. Her old studio—a room added onto a barn out back—was my play room when I became old enough to be trusted alone. In it were flat drawers and files of her art work from earlier years. I remember charcoal sketches of male art-school models, their jockstraps as well drawn as their muscle culture, always faceless or with their heads turned away.

The concept of careers wasn’t much pushed on kids of my generation. I don’t recall anyone ever asking me what I wanted to be when I grew up. But if they had, I would have blithely said a painter. I was already trying my hand. My earliest memories of drawing are of sailing ships. I could draw you the difference between a bark and a brigantine and name every sail and spar on a clipper ship. Mind you, in inner-city Buffalo I had never seen a sail boat, much less been on one. They were mythical vessels from pictures in books. Later, I read every sea-going saga in the Fairfield branch of the Buffalo Public Library. I was Midshipman Horatio Hornblower. I painted water colors of our frigate foolishly under mainsails in a heavy sea. I had never seen the sea.

Winifred had been trained at the Buffalo Fine Arts Academy, which was part of the city’s Albright Art Gallery. When I was sixteen I asked if I could take summer art classes at the now Albright-Knox Gallery. I had no idea what it cost—it never occurred to me—but she arranged it. I didn’t miss a class, even though I was playing baseball for several teams that summer. I would haul my catcher’s equipment bag with me to class with my uniform and all and then hide my art stuff in it from the guys I played with later in the day.

I don’t want to make too much of this, that my mother was an artist. By the time I knew her, she was mostly a mother. She’d had eight kids after marrying at thirty. I was the second to last. I remember once when I was a kid sneaking a look through vanity drawers and coming across her small box of jewelry, inside which was a fancy gold pin that said Art. At the time, I thought it referred to my dad, whose name was Art, and I thought that was neat, that she had a gold pin with his name on it. My oldest brother Joe became a painter for a while. I didn’t.

I never made it past semipro baseball either, though once I left home I have always needed to be near the sea. I was eighteen when I decided I would rather be a poet than a painter. Maybe I should have stuck with the brushes. For thirty years, Winifred was my most constant correspondent, and she carefully filed away every letter and postcard and poem and book of poetry I mailed her. And every time I brought a new wife to Buffalo to meet her, Win would treat them just like family. She was good at that. God bless her. She was good at a lot of things. She lived to be 94.