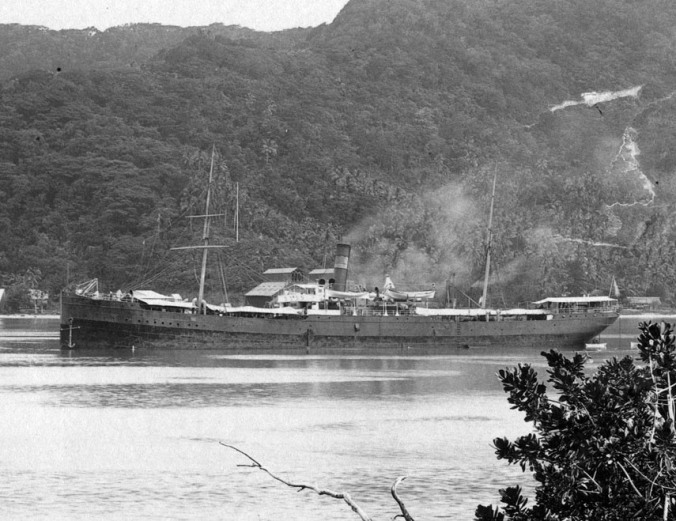 Karen Wheat is the author of a forthcoming book, Pictures of Change in Paradise at the Turn of the 20th Century, an annotated collection of photographs collected by her great great uncle Joseph L. Dwyer during his stay in American Samoa from 1907 to 1913. Karen asked me to write an historian’s end note to her handsome volume. It’s a bit long for a blog post, but I thought anyone interested in a brief introduction to American colonialism might be entertained. For a gripping and comprehensive description of this history see Joseph Kennedy’s The Tropical Frontier: America’s South Sea Colony.

When the young Detroit lawyer Joseph Dwyer stepped ashore at the U.S. Naval Station Tutuila dock on Pago Pago Bay in May 1907 and found his land legs after five thousand miles at sea from San Francisco, he stepped into history—a backwater of history to be sure, but a place and a time that none of his peers back in Corktown would ever know. Out of every generation a few young men wander away from home, but very few venture this far away or into a culture from so distant an epoch. He was not yet thirty. One wonders what heartaches had set him free.

Somehow Dwyer had gotten himself—a former navy yeoman—appointed by the Secretary of the Navy Josephus Daniels to be the civilian secretary to the commandant of U.S. Naval Station Tutuila, a commandant who also served as de-facto governor of the recently acquired isles. The U.S., after successfully subjugating all the native peoples of its continental territory, had only recently entered the game of global imperialism. The ten-week Spanish-American War in 1898 had almost effortlessly garnered Cuba, Puerto Rico, Guam, and the Philippines as stars-and-stripes territories. 1898 had also seen the annexation of Hawaii, and in 1899 the Treaty of Berlin had split the Samoan Archipelago into the suzerainities of Germany and the U.S.A. Dwyer was a factotum of the nascent American empire at the start of the American century.

The first recorded European contact with Samoa occurred in 1722, when Dutch navigator Jacob Roggeveen sighted several of the islands. He was followed by French explorers Louis-Antoine de Bougainville in 1768 and Jean-Francois La Perouse in 1787. These were the astronauts of their era, going where no Europeans had gone before, sailing their culture’s most advanced vessels. Roggeveen named the islands The Navigator Isles, noting in his journal that the native crafts that came out to meet his ships sailed circles around him. He chose not to pause. Bougainville, too, sailed on by. La Perouse stopped to recharge his water casks and seek fresh victuals.

On the north shore of Tutuila, in the now deserted village of A`asu, is a monument set up by the government of France to memorialize the dozen French sailors from the La Perouse expedition killed there in the initial meeting of Europeans and Samoans. “Massacre Bay” they called it. The monument is on the National Register of Historic Places. There is no monument to the 39 Samoan warriors who also died in that first meeting. For decades after, Western ships refused to call at the islands for fear of a similar welcome.

The first European Christian missionary, Englishman John Williams of the London Missionary Society, arrived in 1832. Williams and his followers had a profound impact on Samoans and their culture. Other missions lead by the Catholic Church and the Church of Latter Day Saints followed. Samoans were thoroughly Christianized before the U.S. Navy arrived.

The five small islands (total land area 76 square miles) of Eastern (now American) Samoa were high and volcanic with a population fewer than 7000 (99% Samoan) when Dwyer arrived. In 1900 when the high chiefs on the main island of Tutuila had placed their Xs on the Deed of Cession that had been prepared for them, they basically made a gift of their island to the President of the United States (McKinley at the time), who promptly turned their governance over to the U.S. Navy. It was the navy that had pushed for the acquisition, as they wanted the protected harbor at Pago Pago as a coaling station on the long voyage between Hawaii and New Zealand. Ironically, by 1900 almost the entire U.S. fleet had been converted from coal- to oil-fueled.

In April 1900, the USS Abarenda—hardly a gunboat, but one of the navy’s few remaining colliers—arrived in Pago Pago harbor. Within a week the Deed of Cession had been signed and the American flag raised above the nation’s latest possession, its sole territory in the Southern Hemisphere. The Samoans were pleased to have Uncle Sam rather than the Kaiser as their new landlord, and the first commandant, Cdr. Benjamin Tilley, was diplomatic and made a good impression. By the time of Dwyer’s arrival seven years and three governors later, a proper naval station had been built in the village of Fagatogo adjacent to the dock and coal sheds. A small station ship that did double duty as a tug boat had replaced the Abarenda, but there were few visiting vessels. The coal, unused and not available for sale, had to be constantly watched and shifted to prevent it from spontaneously combusting in the tropical heat of the sheds.

In America, the name Pago Pago had come to denote a place like Timbuktu, impossibly remote, the edge of the world. To the naval officers assigned shore duty at Naval Station Tutuila it must have seemed a demeaning posting—as if they could not be trusted with a real ship, real duties. Annapolis had not trained them to be civic officials. They had been trained to navigate, to fight sea battles, and to keep a disciplined ship. They brought what skills they had in human relations. They complained about the steaming climate and looked forward to their next assignment, wherever it was.

The majority of the U.S. Naval officer corps at that time was from the South. Many of them maintained the racialist assumptions of their culture and background. (The U.S. Navy at that time was officially segregated. Not until 1942 did the navy begin accepting African-Americans for general service. There would be no African-American naval officers until 1944.) These attitudes and assumptions would underlay many of the naval governors’ official acts. (There would be 30 naval governors before the navy gave up control to the Dept. of the Interior in 1951.) Many Naval Station commandants dealt with their command as if it were a ship and the native Samoans just unfortunate cargo.

This attitude was shared by most of their superiors in Washington, by the U.S. Congress (which has to this date not deemed it necessary to enter into a treaty or organic act with American Samoa to change its status to something other than a gift), and even the United States Supreme Court. In its infamous Insular Cases of 1901, the court squirmed to justify the U.S.’s new colonialist avatar under an anti-colonialist Constitution. In Downes v. Bidwell (182 U.S. at 286), Justice Brown wrote: If [distant] possessions are inhabited by alien races, differing from us in religion, customs, laws, methods of taxation and modes of thought, the administration of government and justice, according to Anglo-Saxon principles, may for a time be impossible.

In other words, in spite of having a cohesive culture and a sophisticated and successful form of governance older than ancient Rome’s, Samoans were judged savages incapable of self-governance and not worthy of (Anglo-Saxon) justice.

Joseph Dwyer does not seem to fit this mold at all. He seems to have enjoyed his half-dozen years in Samoa. He served faithfully under three governors, assuming more administrative titles and duties, increasingly dealing with native affairs. The only hint of conflict in his record is with other palagi (Caucasians) at the Naval Station. He got along well with the Samoans; in at least one instance perhaps too well by Naval Station standards, with a Samoan woman friend. His rescued album of photographs displays his appreciation of the place, the people, and his time there.

In his lack of racial prejudice and his embrace of Samoa, Joseph Dwyer reminds me of a more famous palagi wanderer and transplant, Robert Louis Stevenson, who spent the last four years of his short life on the neighboring island of Upolu in (Western) Samoa. Stevenson died in 1894 at Vailima, his outpost in the bush above Apia. For a man of his class and time, RLS was amazingly free of all nativist feelings of ethnic superiority. A colonial-surrogate civil war was going on in Upolu at the time, and RLS took the side of the Samoans. His anti-imperialist writings damaged his reputation back in England. His American publishers cancelled their serialization of In the South Seas as too dry, too strange, too ethnographic, and too sympathetic to the natives.

Throughout his extensive sojourns away from his Scots homeland, Stevenson was able to accept, appreciate, and reserve external judgment of cultures and realities different from his own, while neither denigrating nor deserting his own. He wrote from Vailima to a friend in London: “God’s best—at least God’s sweetest works—Polynesians.” One senses that Joe Dwyer would have concurred.

One thought on “American Samoa a Century Ago”